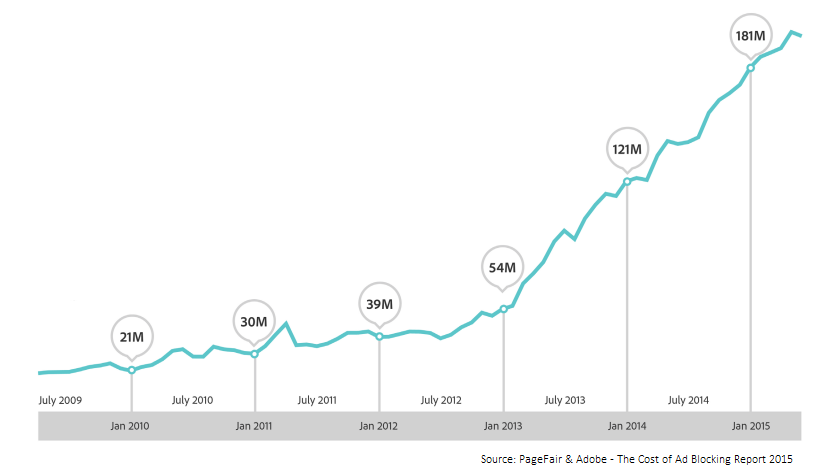 As these numbers are general, it is interesting to investigate if these numbers are applicable to all websites or dependent on the audience of your website. In order to gain insight into the number of visitors that uses an ad-blocker we have placed a piece of code on this blog and on another website (website X) with a totally different audience. This piece of code tracks if a visitor is using an ad-blocker or not and sends the results to Google Analytics which gives us a more detailed view of the visitors that use an ad-blocker.

As base for the code we used the post of Martijn Hoiting which explains how to track how many users are using ad-block software trough Google Analytics with some help from Google Tag Manager. The code creates a fake ad at the bottom of the webpage and the javascript code checks if the div is loaded or not. My colleague Erik Driessen re-wrote the code and removed the jQuery part. Also he added display: none; to the script in order to make sure the bottomAd div won't be visible on the website.

HTML element to mimic the behaviour of an ad

This div element is the one that Google AdSense uses to serve ads. If you have AdSense running on your page, don't place this tag.

The JavaScript snippet that detects if an ad-blocker is enabled.

The downside of this code is that it does not work when visitors are also blocking Google Tag Manager or Google Analytics. In order to track these visitors you can also use this script that works with a PHP-file. As you need to place the script hard-coded on every page you want to track, you need access to the webserver which can make it less flexible than implementing our script trough GTM.

The usage of ad-blockers

Visitors with ad-blocker from desktop

Visitors with ad-blocker per browser

When looking at the age of ad-blocker users it shows that ad-blockers are most popular with the age categories: 18-24 and 25-34 (based on data from TMT). Users older then 34 doesn't seem to be interested in using an ad-blocker or they might don't know how to install them.

It is our intention that in the coming weeks, the script will run on the websites of multiple clients in order to get a better picture of the percentage ad-block users.