This post is about the Smart Clothing Project of Greenhouse Group Labs. Labs is an ideal opportunity for Greenhouse Group to test technology before it has fully matured. The Lab is run by students from tech universities.

What is smart clothing?

Smart clothing is clothing with electronics embedded in it. This can be to transform the clothes, communicate to other hardware or even generate energy. One of the first companies to start with smart clothing was Cutecircuit, launched in 2004. They make dresses with electronics embedded, worn by Katy Perry, Nicole Scherzinger & Irina Shayk. Some big companies are starting with smart clothing. Google & Levis are working on Project Jacquard, which is expected to launch in 2016.

Smart clothing can enhance the users experience while watching movies or playing games. The entertainment business already uses technologies te enhance the customers experience. Examples are IMAX 3D or the newer Dolby cinema used in, you guessed it, cinemas and the Oculus Rift for virtual reality experiences. Also augmented reality is coming.

We're developing a shirt which gives the wearer physical feedback, recreating the characters surrounding. By feeling temperature and using haptics to simulate touch and movement the shirt adds an extra dimension to the wearers experience.

We started developing prototypes with arduinos. We experimented with vibrating pads and tried to mimic touch. After some experimenting we developed a sleeve with vibrating pads integrated. We took a video of someone getting a tattoo with some slow motion footage in it. Because of the slow motion footage the needle had different speeds. We wanted to sync our vibrations in the pad with the needle impact. To achieve this we made a file which contained:

Put in a txt file it looks like this:

We created our own video player. When playing a video it firstly opens the additional file and stores the data. After this the video starts playing, while the video is playing the current time is compared with the start times received from the file. If the times match the player sends the corresponding data to the sleeve. 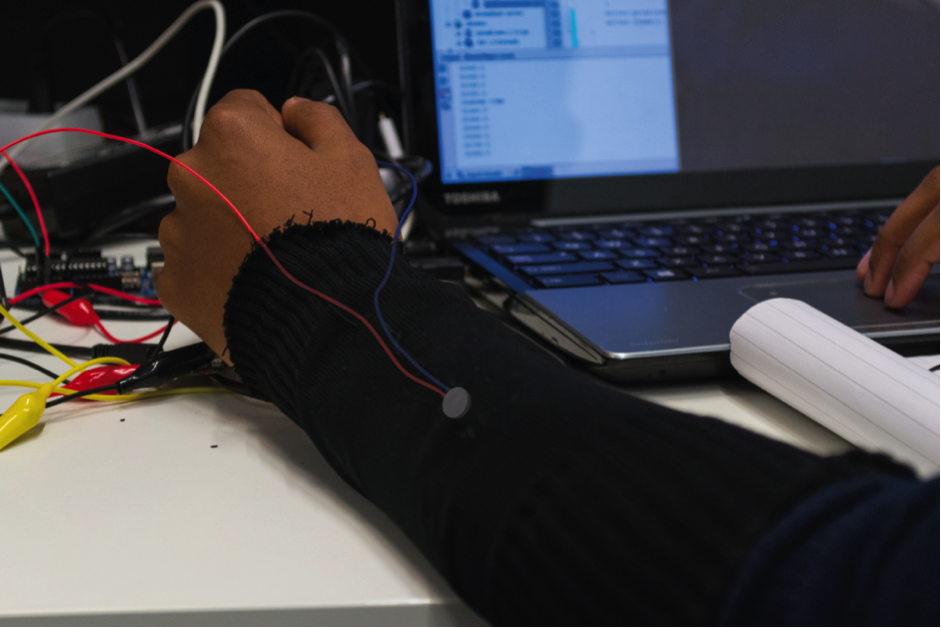 Replicating touch with the use of vibration motors

Vibration has been used as a method for communicating through touch all the way back from 1996. The first use of vibration was to replace the standard ringtone alert. Because of the great success of this implementation we still see this vibration in the smartphones of today.

But the mobile industry was not the only place communicating through vibration succeeded. These days you will see this kind of communication in gaming controllers and personal computers. Sadly these interactions with vibration are still really basic while the possibilities are broad.

Small vibrations in different speeds and intervals could communicate different messages and vibrations that fade in and out in different locations could give the feeling of something moving from place to place.
Combining this with the world of virtual reality, where there has been lots of progress in replicating the visual experience this would give new possibilities to also incorporate a physical experience. Vibration motors can be used to give information to the user, but sensors in smart clothing can be used to receive information. Pulse sensors can measure a user’s heart rate for instance. Excitement and arousal are often measured by looking at someone’s heart rate, so this can be very interesting information to receive. You can define which elements in a game or movie excite you. Recommendations for movies won’t be based on your watch history and the genres you like anymore. Instead it will be based on your feelings towards certain elements of certain scenes.

Also, imagine a review for a horror game, based on the user’s heart rate data. It can’t get more honest than seeing how many times the user was scared by elements in the game. Sharing and comparing your data with the rest of the world can give everybody a lot of new insights.

Smart shirt replicating the physical experience of a game

We're currently developing a shirt similar to the sleeve. This will be connected to a demo game which we're developing as well. This shirt will have multiple vibrating pads, heating pads and a breathing sensor integrated.

The character in the demo game has body parts similar to a human. Based on impact on a specific bodypart the shirt will know which vibration motor needs to be triggered. For example: You get shot on the right side of your in-game characters chest, this will trigger the vibration motor on the upper right side of the shirt. The video below shows more information.

After finishing our prototype we want to get some feedback and reactions from people inside the Greenhouse Group to further improve it and to showcase what we are working on.

We also had the idea to use the Oculus Rift for our later prototypes to give a more complete experience.