Last week, I attended the Conference day of the seventh official Google Analytics User Conference in Amsterdam in search of new Google Analytics tips and tricks. More information about the Program of GAUC 2016 can be found here: http://www.gauc.nl/programma-conference-day/.

So, what are the key takeaways of the master classes this year?

1: From offline to online

As many of our clients are active both offline and online, I attended the Master Class "Remove the split between online and offline".

The first difference discussed was the difference between offline and online marketers. As an example, offline marketers trust on Dutch television ratings. These ratings are based on just 1250 boxes that monitor what you are watching and represent the total of 7.7 million Dutch households. Offline targets are mostly goals based on top-of-mind awareness and indirect sales. In contrast to the goals of offline marketers, the targets for online marketers are often based on conversions, ROI and cost per order. However, this largely depends on offline presence and brand. Besides this, online marketers suffer from adblockers but still have most of the data.

Research on the customer journey shows the shift from offline to online is now clearly visible. Knowing what consumers search for online can be very useful information for offline sales. On the other hand, online marketers can learn a lot about why consumers buy products offline.

But how can you integrate online with offline data? In my opinion, this is a question that has not yet been answered. According to this master class there are a number of ways to accomplish this integration:

For users of Google Analytics, the Measurement Protocol can become an important tool to bridge between online and offline. With the Measurement Protocol you can collect data from any device with an internet connection. This enables the possibility to send data about offline visits into Google Analytics. An important point here is the customer identifier. A Customer identifier, e.g. an ID attached to a loyalty card, can be used to link online and offline events of a customer.

The two main points of the master class were that you have to define your KPIs and Targets before setting up Google Analytics and that you always have to take more then one metric in account. For example, maybe visits have dropped, but the conversion rate was higher (and with it, orders kept coming in). This model helps companies to visualize what their KPIs are and which measures can be used for that KPI.

The last masterclass I attended discussed something that you probably heard of last couple of weeks: Google Analytics Premium Suite 360. With this new offer of a complete package that includes analytics, A/B testing and data visualization, Google seems to follow the competitor Adobe. Google Analytics 360 Suite consists of a total of six products, three of them are truly new. 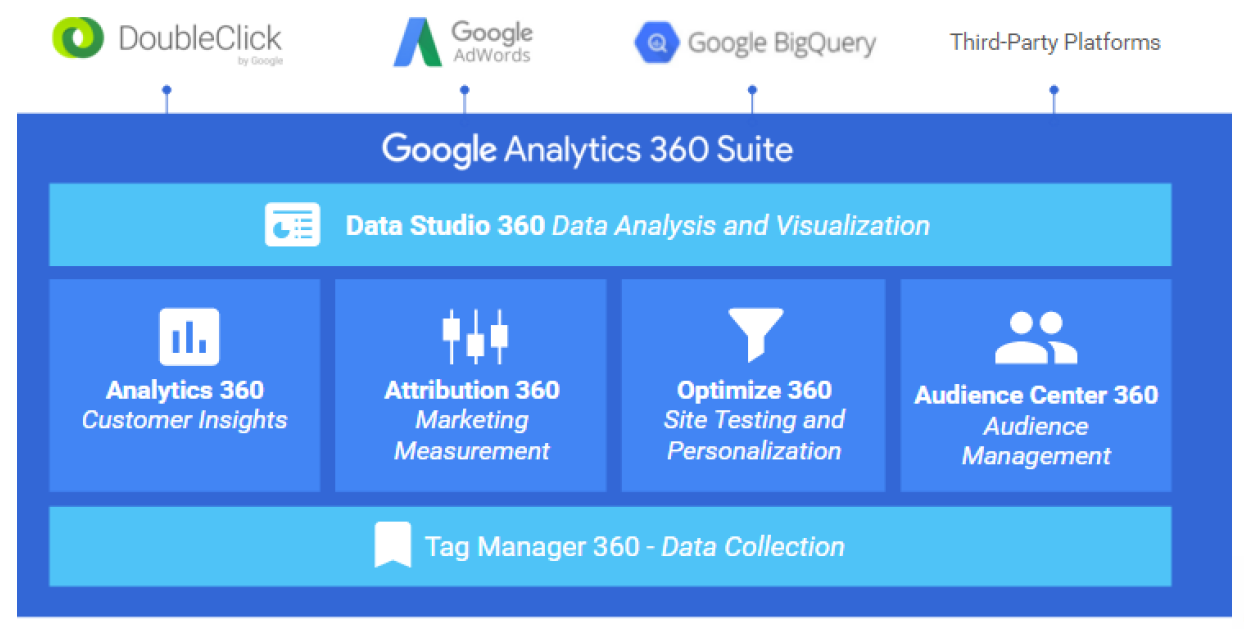 Audience Center, which was called DoubleClick Audience Center before is their Data Management Platform (DMP). This allows marketers to get more insights on who their visitors and customers are and find similar people across multiple channels, devices, and campaigns. So far we know that this platform will have a native integration with AdWords and DoubleClick, but also the possibility to integrate it with other demand-side platforms (DSP).

Google Optimize can be used for A/B testing and personalization purposes. In addition to Google Website Optimizer and Google Experiments, this is Google's third attempt in the A/B testing landscape. Like Optimizely and Visual Website Optimizer, Google Optimize will also contain a 'What-You-See-Is-What-You-Get-Editor' to create a new variant from the current web page. Adapting the website will mainly be based on the Tag Manager 360 technology. The big advantage for Google's own A/B testing tool will be the very easy integration with other tools such as Google Analytics, Audience Center and AdWords.

Like the previous two features, the Google Data Studio 360 is new. This product will be the platform where data can be analyzed and visualized. The Data Studio integrates data from all Google Analytics Suite 360 products and other external data sources. The product is based on the Google Docs technology and allows users to collaborate in real-time and share data to create interactive reports and dashboards. The good part is that integration with BigQuery is possible, the bad part is that other (non-Google) data sources will probably not be supported when Data Studio 360 launches.

Google Attribution, formerly known as Adometry, used to be a standalone attribution tool that Google has integrated in Google Analytics Premium. After the name change, this product will become part of the Google Analytics 360 Suite and will continue to provide insights on the actual value of marketing investments across multiple channels, devices, systems and offline data points (e.g. When TV spots are broadcast).

Formerly known as Premium, this will continue under the new name: Analytics 360. Google Analytics 360 distinguishes itself from the free version with special features:

Most of our clients use the standard version of Google Analytics which has enough features to work with. The main reason for switching to 360 would be sampling.

Should you make the switch to 360?

So, is it time to change to the Google Analytics 360 Suite? It's good to know that all the products in the 360 Suite are paid, and the price of using the various products is not entirely clear. Google Analytics Certified Partners will soon be notified of updates so that they can inform their customers about it. While the name of the Suite contains Google Analytics, it is not mandatory to buy Google Analytics 360 in order to use the other 360 products. During the coming weeks and months, Google will release the first beta's of Audience Center, Optimize and Data Studio. As a fan of data visualizations, I am looking forward to work with the Data Studio 360.

All things considered, the Google Analytics 360 suite looks very promising. It is too early to conclude that you should or shouldn't buy the whole suite, as the beta versions of the new products are not released yet and the prices are not known. The products Google Analytics 360 and Google Tag Manager 360 won't offer any new features upon launch, so the question remains, why switch now? I am not sure if Google Analytics 360 suite will become a success if they only support Google products / data sources. Nevertheless, I am very excited to start testing the beta versions of the Suite in the coming months.