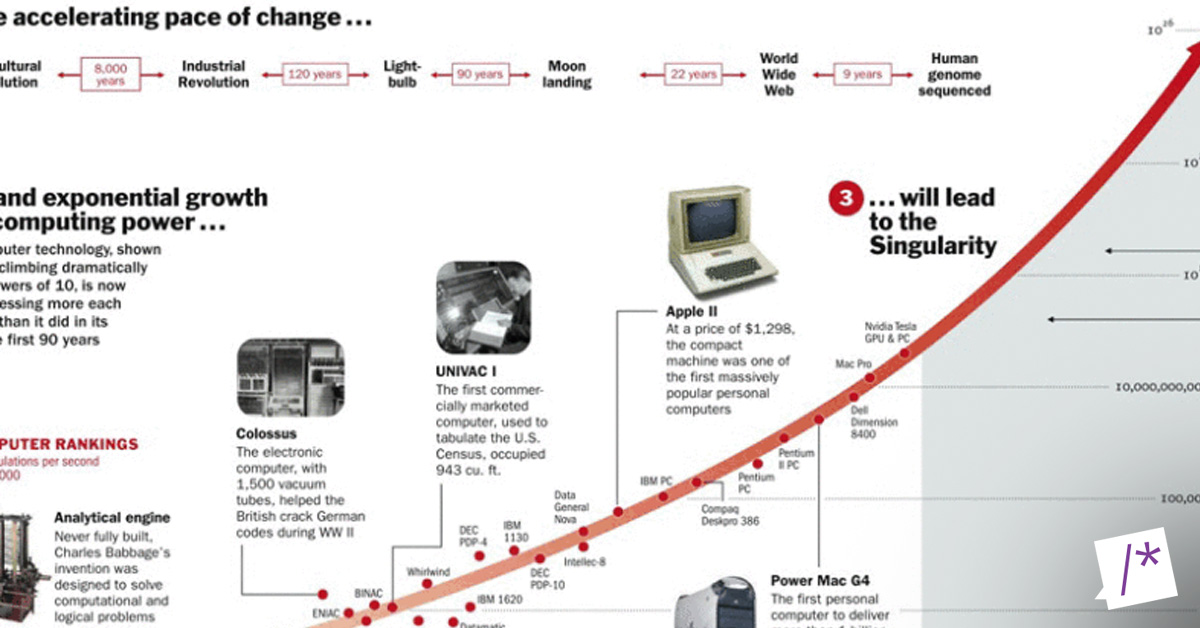 It’s been about a year now since the 50th birthday of Moore’s Law. For the ones who don’t know him, let me start with a short description of Moore and his Law.

Gordon Moore is one of the founders of Intel. In 1965 Moore wrote an article in Electronics Magazine in which he predicted that in the coming 10 years (meaning until 1975) the number of semiconductors in a circuit would double every year. This implied an unforeseen exponential growth of processor power within 10 years. Later in 1975 the expectation was adjusted to a 2 year but still, to quote Moore: "It was far more accurate than I could have anticipated".

Moore’s Law has eventually become an archetype to demonstrate the fact that technological development and change move faster in an accelerating way. This also means new innovations rise - and become obsolete - faster and faster.

Think of VHS video. The VHS has had a mainstream presence in households for almost 25 years before it was replaced by DVD. The DVD lasted for about 12 years before it was replaced by Blue Ray about 5 years ago which is now almost made obsolete after by online streaming services. Other examples like "Record – Tape – CD – iPod - Spotify" are numerous. It has become a "law" that storage capacity and bandwidth double every year and become twice as cheap every year. It has become a "law" that people share two times as much via social media every year compared with the year before.

Eventually, scientists expect computers to exceed the thinking power of the human brain somewhere between now 15 to 20 years. Speculations about the impact when we reach this point of singularity are diverse - but my personal favourite viewpoint is written by Tim Urban of the Wait But Why blog.

Now I don’t want to go into detail about the singularity. I want to focus on the human brain capacity in relation to this tech revolution.

One of the particular implications of this tech revolution is the exponential growth of communication messages we get to see every day.

The amount of communication produced in the world since the beginning of mankind until 2003 is being broadcasted into the world via the internet every 5-10 minutes at this moment. 90% of all data in the world was generated over the last two year. On average, we receive 3500 commercial messages every day. That is 1 every 15 seconds.

And besides a quantity of messages, tech drives us to consume these messages closer and closer to our brain. From TV, to PC, to your smartphone, to virtual reality and eventually a simple lens should do the trick.

And we see the effects in front of our eyes when we look at our kids, right? If you have friends with kids you almost certainly have heard them say: “My kid is only 1,5 years old but if you give her a tablet, she knows how to find YouTube and play her favourite videos... really cool...”

Don't get me wrong, I'm a tech aficionado and I love gadgets. I’m not the one to morally judge other people’s on the way they raise their kids because I’m probably a bad example for my kids too. But I wonder what this development might do to our mental and physical wellbeing. What are the real short-term and long-term consequences?

In a DWDD University broadcast about the brain (Dutch only), the famous Dutch Professor Erik Scherder explained really simple that most new technology makes us less physically active. Less physical activity leads to a lowering of the production of neurotoxins which are the nutrition for the neurotransmitters in your brain. Active neurotoxins also generate stronger contact points around your brain’s neurons that in effect grow your spatial awareness. That’s why - in the long term low physical activity increases the chance of getting a brain stroke.

Besides this, research has shown that stress caused by information overload costs US society 900 billion dollars a year. 42% of stress related illness is connected to this Infobesity - the popular term for Information Fatigue Syndrom (IFS). People suffering from IFS feel depressed, afraid, the compulsion to stay connected, have a lower immune response and sometimes even become hostile towards their environment.

And that’s hardly a surprise because if we match Moore’s Law curve with the development curve of the human brain you see a similar pattern with the slight difference of a few million years.

So, my educated guess is that IFS and brain-numbing device usage will not make us happy and healthy people.

The argument that we have the ability to adapt does not make real sense. True; people have an incredible ability to adjust to new situations. We weren’t designed to drive a car over a freeway at 120 km/h or to fly a plane but we can. But the only reason we can do crazy stuff like that is because we can put our attention to it. Focused attention. And when do things run out of hand and become dangerous? Exactly! When we get distracted.

And that’s the key to the Tech Revolution vs. Human Evolution discussion: We constantly get distracted by technology. The never-ending call of pings, rings and vibrations. We are continuously seduced by tech stimuli to step out of the ‘real’ world into a rabbit hole of digital communication. We are living in a constant mode of anxiety that – for a few years back – was only experienced by air traffic controllers. And they are allowed to do their job only for 4 hours in a row for safety reasons.

The underlying commercial reason behind this is the fact that there is a huge value in our attention. If we talk to each other in a physical world – no company makes any money. If they get us to talk to each other on Facebook – they do. Simple as that.

So the real problem here is that technology is currently undermining our ability to consciously pay attention. Either to a message, to each other, to ourselves and to our environment.

This means we are not talking about an attention-economy anymore, but about a distraction-economy where we – marketers and media - overflow people with messages and information to the point that they can’t handle it anymore. They become physically and mentally ill - if they haven’t blocked us already.

So are we as digital marketers responsible? Are we the Walter Whites of digital addiction? Let’s call it a draw. Consumers and marketers are both responsible. And we also have a common interest. The trick of a good dealer is to give his clients as much as they can handle to feel as happy as they can be, without OD-ing them out of business (this is a metaphor of course ;-)).

If we consider the rise of ad-blockers and the amount of ad spending that is wasted on bad targeting anyone can do the math and come to the conclusion that we need less quantity- and more quality communication. The moment we call for attention it should add value for both the advertiser as well as the consumer.

The best any brand could give it’s consumers these days is quality time. The best a brand can get back from consumers is focused attention.